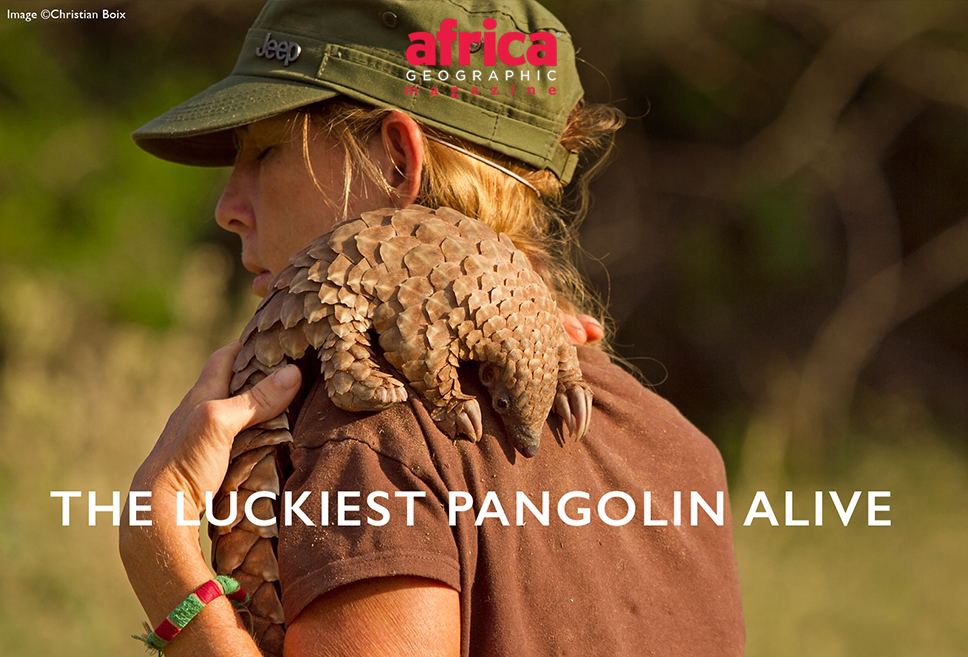 THE STORY OF A LITTLE PANGOLIN WHO'S MAKING A BIG DIFFERENCE

Namibia’s Herero people believe that the pangolin has transformative powers. The story goes that if a pangolin is found, it should be taken to the chief who will throw it in a fire to be roasted alive, and that by eating the flesh one can attain great luck. But one pangolin is changing that. His name is Katiti, which means “little one” in the Herero language. He might actually be the luckiest pangolin yet.

One of my favourite encounters with one of these curious creatures was in Botswana’s Kwando Reserve, just south of Namibia’s Caprivi Strip.

“Pangolin! Pangolin! Pangolin!” came the excited cry as our guide, Mark Tennant, gunned the safari vehicle towards a distant group of wild dogs that were bouncing up and down like pogo sticks in the long grass. As we got closer I counted five dogs, all atwitter as they danced about – in response to what, I could not see.

“Call me sceptical,” I muttered from the seat beside him, “but how do you know there’s a pangolin there?”

“That’s what wild dogs do when they find a pangolin!” came Mark’s breathless explanation. And sure enough, there it was, a Cape pangolin curled up in a perfect, armoured ball.

Realising they could do nothing with the pangolin in its protective mode, the wild dogs made off. But instead of following the dogs on their hunt, the group of eight safari-goers aboard the vehicle agreed to spend time with the pangolin. Such is the allure of this elusive creature.

It took ten minutes of awed silence for the shy creature to uncurl itself and amble off in that strange floating hovercraft way, unhurried and seemingly unperturbed by his groupies and their whirring shutters. It was broad daylight and, although I am privileged to have seen many pangolins on this awesome continent I call home, this was one of my most memorable sightings. I am sure that pangolin lives on in those lucky people’s memories and photo albums.
But the hope is that they don’t only live in memory. The dominant news about Africa’s pangolins is that they are being harvested in great numbers to satisfy the veracious demand for Eastern food and medicinal cures. It’s not surprising that the Asian pangolin species are on the brink of extinction, and now the great Eastern tide is sweeping through Africa, hoovering up more and more of the little “scaled artichokes”. Click here to learn more about the trade in pangolin meat and scales

A Cape pangolin was rescued from such a fate. She was wild caught and taken around a Namibian town in a box, no doubt to be sold on the black market. A shop owner felt sorry for the pangolin and bought her before passing her on to local wildlife organisation, Rare and Endangered Species Trust (REST). The founder and director, Maria Diekmann, took it upon herself to rehabilitate the pangolin so it could be released into the wild.

As she was nursing it back to health, a strong bond formed between Maria and the pangolin she named ‘Roxy’. As hard as it was for Maria to watch her go, Roxy was destined to return to the wild, but not before leaving a precious gift: her son, Katiti. This gift has grown up and is now an invaluable source of data, for efforts to better understand pangolins, and to rehabilitate and return pangolins that fall victim to poaching, into the wild. Katiti is also a lucky charm.

Read more below the advertisement

Maria explained that after Roxy’s departure, Katiti’s condition deteriorated on his diet of ants and milk. After much experimentation and advice from Lisa Haywood of Tikki Haywood Trust, the only other person known to have hand-reared a baby pangolin, Katiti’s health and diet started to improve and after a few months he was weaned off substitutes and foraging naturally.
He now sets his own daily routine and forages in the wild for about five hours a day, returning to the safety of REST for a well deserved rest. He even interacts with the wild pangolins he comes across while foraging. A GPS unit has been attached to the scales on his back and his every move is monitored, for extra security, and for the collection of valuable data. The plan is to return Katiti to the wild eventually, and work is in progress on a more sophisticated monitoring unit that will send back even more vital information.

Just as valuable is Katiti’s role as ‘comforter’ to recently rescued pangolins. This increases their chances of successful rehabilitation and release. Experience has taught Maria that immediately returning a confiscated pangolin back into the wild, without rehabilitation, often results in the death of the animal, as they have to negotiate past established pangolin territories and evade predators – a tough ask if they are injured, stressed or malnourished.

Two such pangolins were ‘Merel’ (2yrs) and ‘Keanu’ (9mths), found together in an old metal drum where they were held for three days awaiting a buyer. They were cold, malnourished and Keanu had a broken leg. Merel was successfully released, but Keanu died of complications picked up during the three days in the cold without food or water. Pangolins are particularly susceptible to pneumonia due to their lack of fur.
Another completely rehabilitated pangolin that Katiti helped nurse back to health was named ‘Coll’. Like Katiti, he was fitted with a GPS device and released on a neighbouring farm. His monitored wanderings provided valuable data for a good while before he died of natural causes – predation either by hyena or honey badger.

Apart from being a comfort to other pangolins, one of Katiti’s most important roles is educating people, and tugging the odd heart-string. Local Herero people have been thrilled to have their photo taken with Katiti. Importantly, some of those people are Herero chiefs who have returned to their communities telling them that their picture with the pangolin is bringing luck to the community, because a picture lasts longer than just the taste of meat. They are now motivating their communities to leave the pangolins where they belong, in the wild.

REST continues to handle a steady stream of injured and confiscated pangolins that require extensive rehabilitation before they can be released. Each successful rehabilitation results in lessons learned and growing expertise and data about these wonderful little creatures. And you can help:

REST is desperately in need of funding and would appreciate your support. You can find out more about making donations by clicking here.