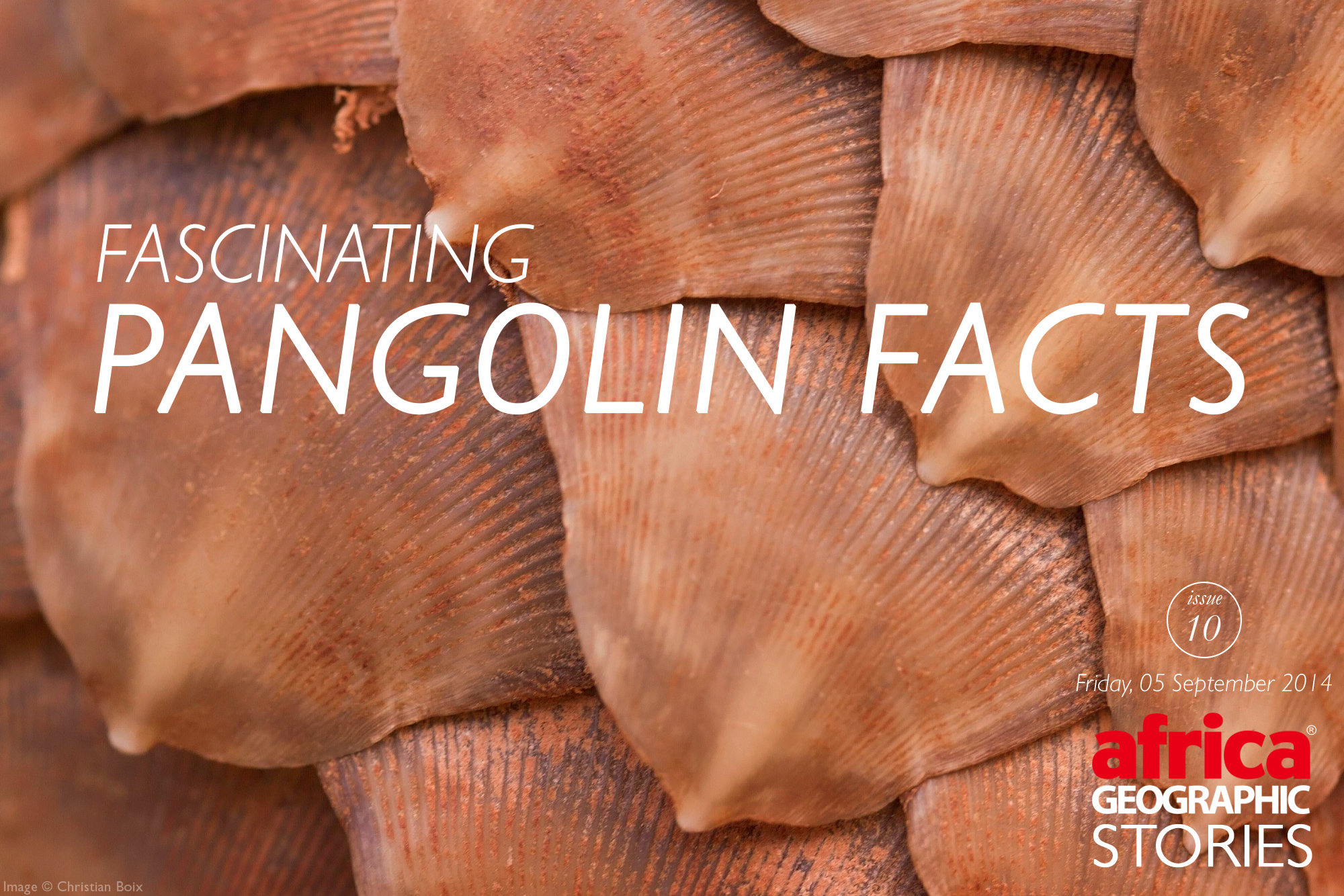 GET TO KNOW MORE ABOUT ONE OF AFRICA'S MOST ELUSIVE CREATURES

Pangolins are fascinating and intriguing creatures. Also known as the scaly anteater, these mammals are covered from head to toe in scales made of keratin, which is the same substance found in our nails and hair.

Tragically, pangolins are the most trafficked mammals in the world – poached from their habitats in Africa and Asia, their body parts sold in countries like China and Vietnam as a delicacy or are used for their so-called ‘mythical healing properties’.

However, there are organisations out there doing their best to protect pangolins, such as the Pangolin Working Group, a non-profit organisation committed to the conservation and preservation of Africa’s four pangolin species and the habitat they occupy.

Join us as we look at some fascinating facts about these incredible, but threatened species. 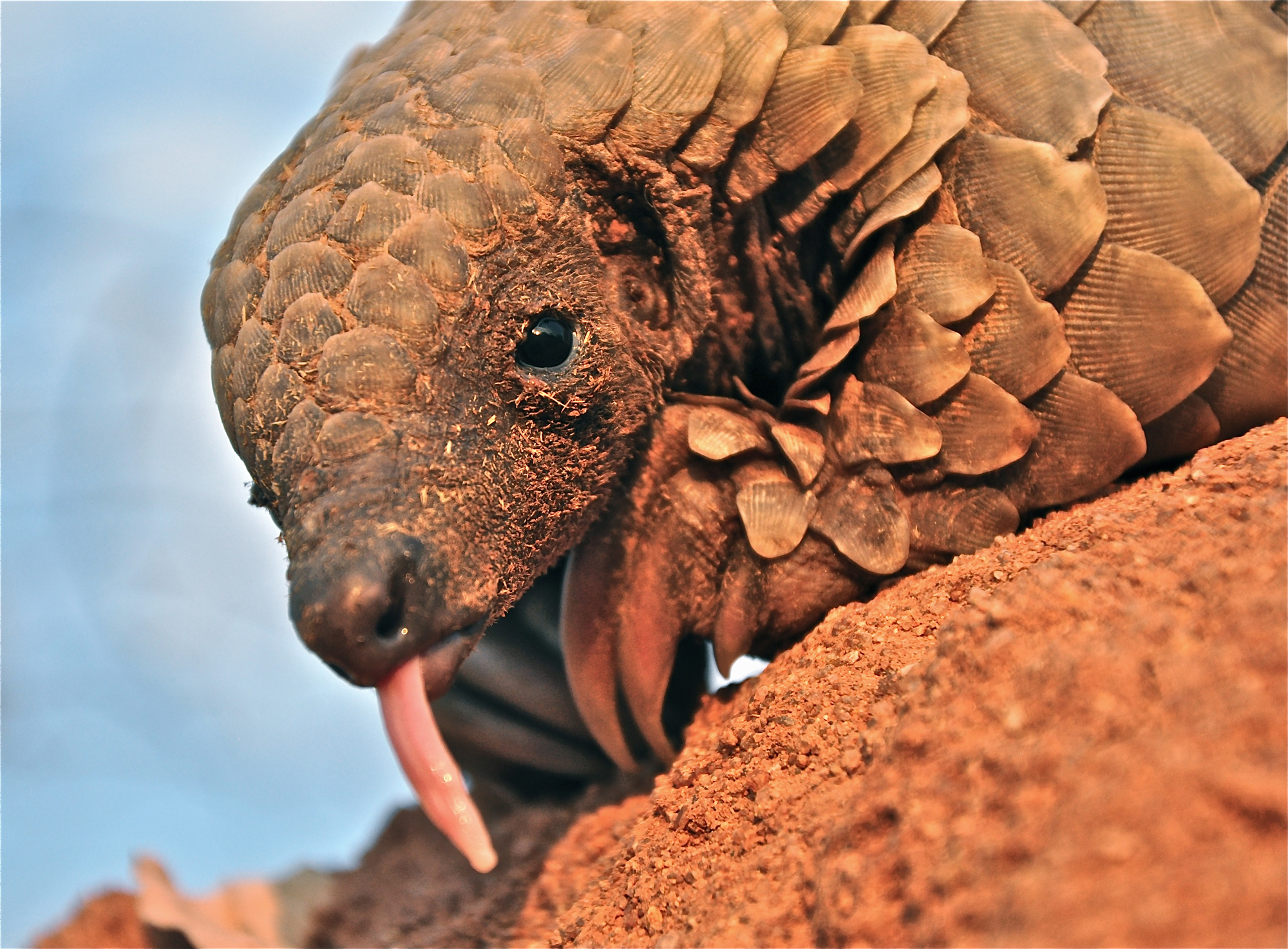 Pangolins, such as this ground pangolin (Smutsia temminckii), use their long sticky tongues to eat ants and termites © Rare and Endangered Species Trust (REST)

1. The word ‘pangolin’ comes from the Malay word ‘penggulung’, which means ‘roller’. This refers to the defensive stance – rolling into a ball – that pangolins take when startled or when protecting itself against potential predators. Another term used for pangolins is ‘scaly anteater’ – this name comes from the fact that their diet is exclusively ants (and termites).

2. Pangolins typically give birth to only one baby per pregnancy, after a gestation period of between 69-150 days (species dependant). The babies are born with soft scales, which soon harden. The young are usually weaned at around three months of age, though at about one month old they will start to eat ants and termites. In the meantime, they cling to their mother’s back while she forages.

3. They are not related to anteaters, sloths or armadillos. In fact they are more closely related to carnivores.

4. Pangolins are the only mammal with scales, which make up about 20% of their body weight.

Clockwise from left: 1) A baby ground pangolin is carried on the back of its mother © Maria Diekmann/Rare and Endangered Species Trust (REST); 2) Pangolins are bipedal, walking on their hind legs with the front limbs and tail held off the ground © Christian Boix; 3) The scales of a pangolin are made out of keratin, the same substance found in our nails and hair © Scott Hurd

5. The scales of a pangolin are one of the most sought-after items in the illegal wildlife trafficking market. In mainly China and Vietnam, their scales are highly prized by consumers who turn to traditional Chinese medicine as a means of recovering from various ailments. Pangolin scales are believed to cure a range of problems, from asthma to arthritis. In fact pangolin scales have no medicinal benefits, considering that the scales are made of keratin – the same material that a human’s fingernails and hair are made from, and rhino horn, the “teeth” of baleen whales, and the claws of bears, lions and other clawed animals.

7. Pangolins have no teeth, and use their long sticky tongues to eat ants and termites – up to 70 million per year. The tongue can reach up to 41 centimetres when extended! It is attached at the pelvis and last pair of ribs, and the rest is stored in the chest cavity.

8. They locate their meals by using their acute sense of smell, and dig for ants using their strong claws. They eat small pebbles to aid with digestion. Pangolins can constrict their ears and nostrils while feeding – to keep insects out. 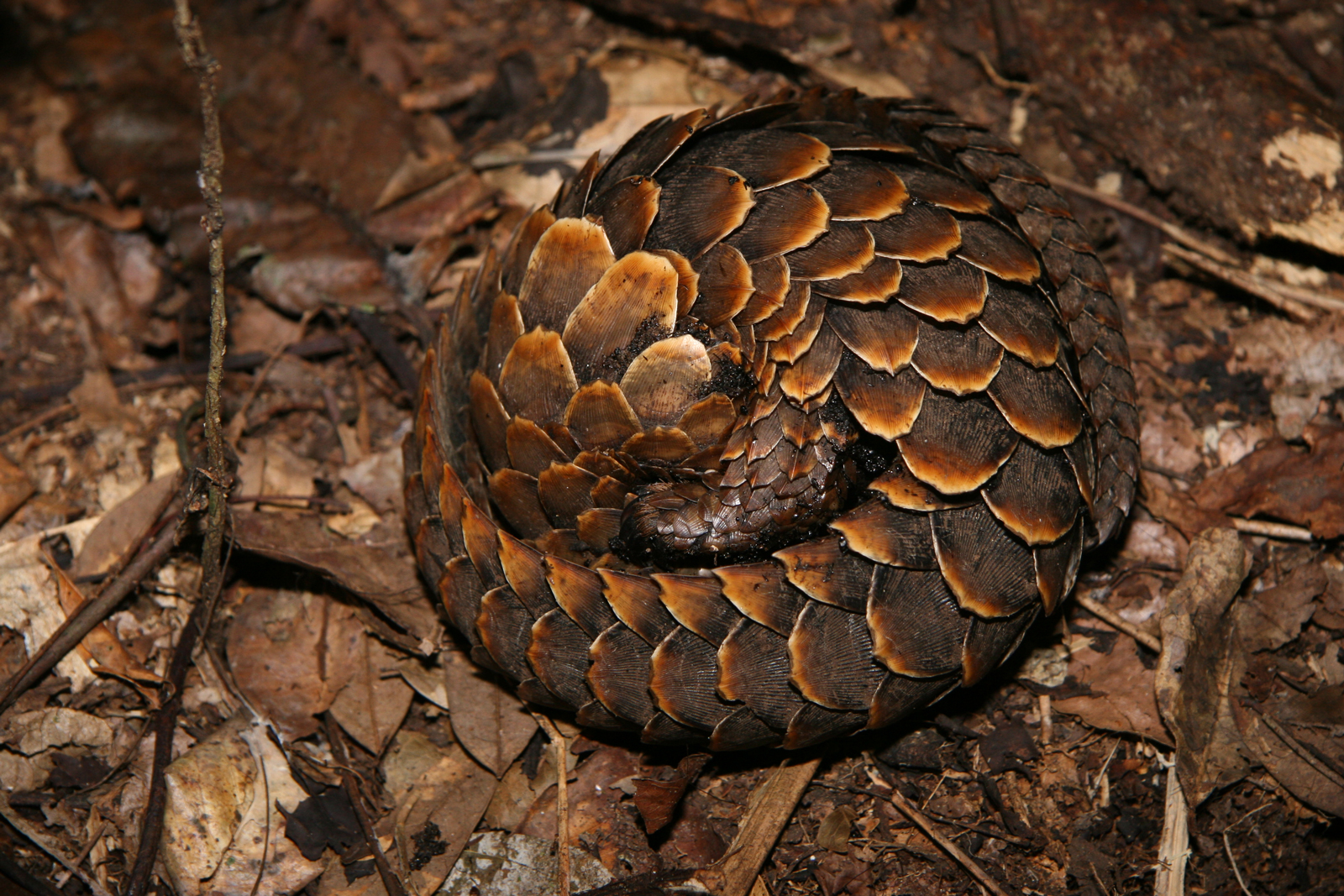 Pangolins, such as this black-bellied pangolin (Phataginus tetradactyl) defend themselves by rolling into a tight ball to protect their soft bellies © Rod Cassidy/African Pangolin Working Group

9. They have poor vision and hearing, but an excellent sense of smell.

10. Pangolins have long curved claws on their front feet, which they use to turn over rocks, pull bark off trees and logs, and excavate ant nests and termite mounds. Tree pangolins also have long claws on their back feet, plus a soft pad on the tip of the tail, to assist with climbing trees.

11. They are solitary and predominantly nocturnal, although they do become active earlier during cold weather. Young animals are also prone to be more active during the day.

12. Pangolins do not dig their own burrows, but make use of abandoned aardvark, porcupine and warthog burrows. They may also shelter in termite holes, caves, in-between rocks, shrubs or piles of debris.

13. Pangolins are bipedal, walking on their hind legs with the front limbs and tail held off the ground and used for counter-balance.

Clockwise from top left: 1)  A white-bellied pangolin (Phataginus tricuspis) © Darren Pietersen/African Pangolin Working Group; 2) A pangolin enjoys a muddy dung bath © Christian Boix; 3) All pangolins have long curved claws on their front feet which they use to break into ants nests and termite mounds © Scott Hurd; 4) The black-bellied pangolin’s tail can be twice the length of its body, hence the species’ name © Rod Cassidy/African Pangolin Working Group

Here we take a closer look at the four African species:

This terrestrial species is the only species that is found in southern Africa. Its range extends from southern Africa through most of East Africa to Sudan and southern Chad. It inhabits dry and arid savannah and desert environments. Adults grow up to 1.2 metres in length and weigh in at 19 kg, but average 10-15 kg. This species often uses the burrows of other animals, such as aardvarks and aardwolves.
• IUCN Red List: Vulnerable

This is the least common of the two terrestrial species and occurs in forests and forest-savannah mosaics in Central and West Africa. It is the largest living pangolin species, with adults growing up to 1.5 metres in length and weighing up to 35 kg.
• IUCN Red List: Endangered

This is a small, arboreal species. It is the most common and widespread of the two tree pangolin species, occurring widely in West and Central Africa, where it inhabits forests, dense woodlands and even secondary forests and agricultural lands (especially oil palm plantations). Adults are small, reaching a maximum length of 1 metre and weighing 1.5-3 kg, but typically only 1-2 kg. Certain physical characteristics separate the arboreal pangolins from ground pangolins: They are smaller in size, have very small first forelimb claws, their eyes are larger, their scales have an irregular arrangement, and they have tails pads which are used for climbing. While both of the tree dwelling species have long tails, the white-bellied pangolins is notably shorter.
• IUCN Red List: Vulnerable

This species is also arboreal, and is the rarest of the two tree pangolin species. It occurs in forests in Central and West Africa, and is mostly restricted to swamp forests and riparian vegetation. It is also said to be the most aquatic of the four African pangolin species, regularly taking to water to escape predators or to cross rivers. Adults are also small, attaining a maximum length of 1.1 metres and weighing 2-3.5 kg.
• IUCN Red List: Endangered 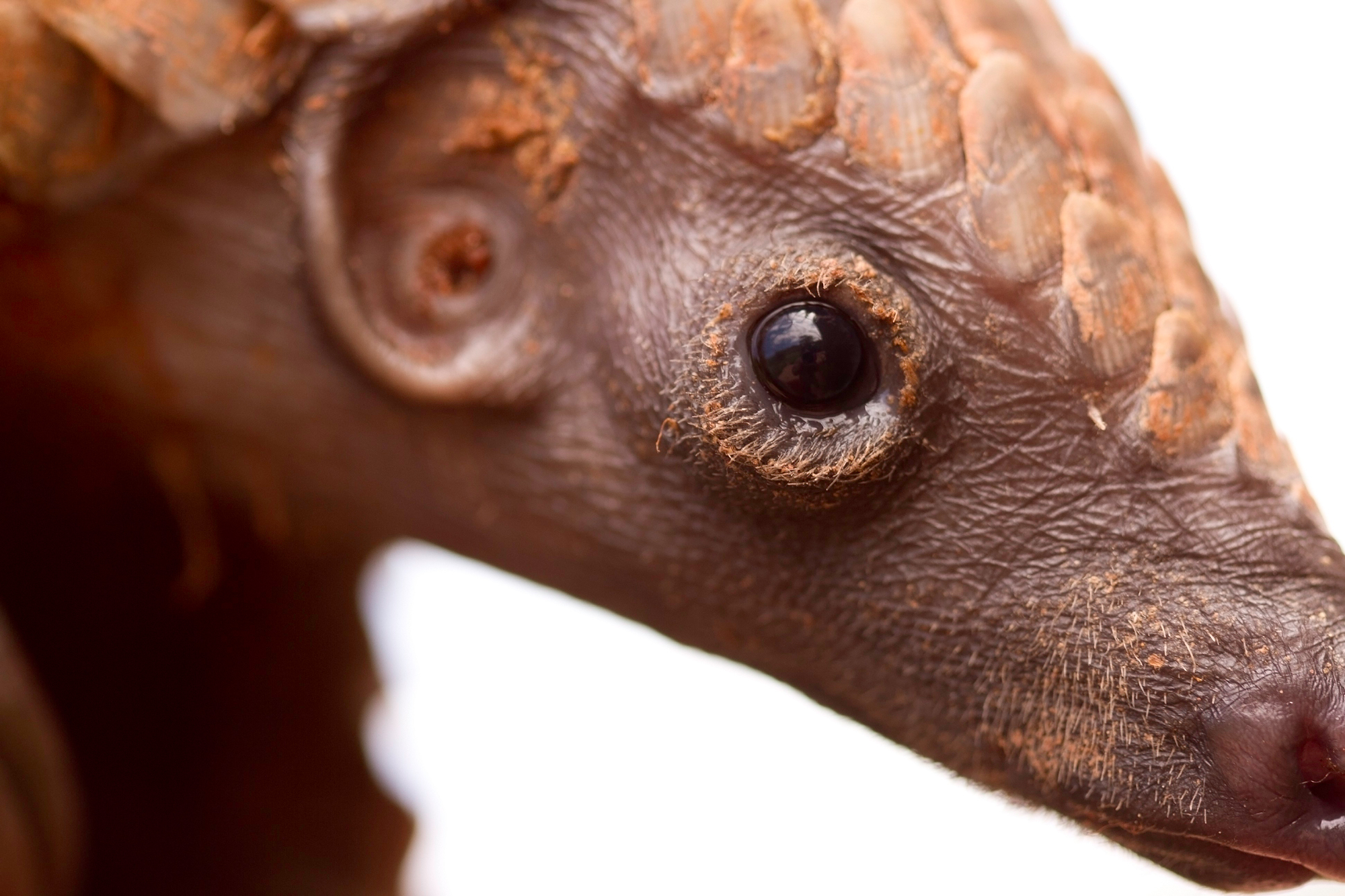 Up close with a young ground pangolin © Christian Boix